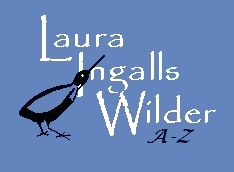 A right to claim or demand; a title to any debt, privilege, or other thing in possession of another. “A bar to all claims upon land.” (Hallam) The thing claimed or demanded; that to which any one has a right; as, a settler’s claim. — Webster, 1882

Four-fifths of the tree claims and two-fifths of all other claims have been filed on in Kingsbury county. – (Yankton, D.T.) Daily Press and Dakotaian, May 4, 1880 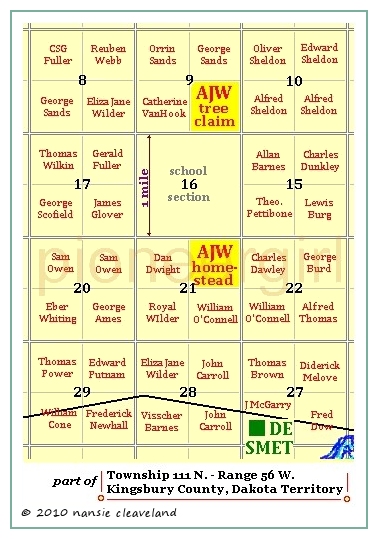 What happened to Almanzo Wilder’s claims?

Almanzo Wilder first filed on two quarter sections in Kingsbury County, Dakota Territory, on August 21, 1879: a homestead (the NE 21-111-56) and a tree claim (the SE 9-111-56). The map at right shows the location of Almanzo’s claims north of De Smet, as well as who his neighbors were during his homesteading years. Although Almanzo owned property in the town of De Smet prior to his marriage, it is unclear if he ever lived in town except while baching with his brother, Royal Wilder, at the feed store on Calumet Avenue during the Hard Winter of 1880-1881.

Almanzo established residency on his homestead in September 1879. He built a frame house 12 feet square; it had a cellar, 2 doors, and 1 window. He dug two wells. He built 2 barns: 14×16 ft. and 16×32 ft., both of frame construction. He planted some trees and cultivated from 20 to 32 acres during his 5-year residency. At final proof, the house, barns and crops were valued at over $300.

Final proof was made September 12, 1884; his witnesses were Alfred Sheldon, Oliver Sheldon, Robert Boast, and Charles Ingalls. Almanzo testified that he was gone from his claim “no more than a month at a time” during the winters of 1879 and 1880, and also while working for the railroad in 1880. Remember that only a six months continuous residency was required per year, and the government made an exception for extra time away from claims due to the Hard Winter.

Laura Ingalls and Almanzo Wilder were married August 25, 1885, and they moved to a new house built on Almanzo’s tree claim. Although events in The First Four Years weren’t recorded exactly in the order they historically occurred, the book never avoids the many hardships encountered during the Wilders’ early married life, including dust storms, blizzards, and crop failures. Laura didn’t record that Almanzo was unable to pay $18 of the taxes on the homestead for the year 1886, or that their barn burned on July 16, 1887. From the De Smet Leader: “A. J. Wilder’s barn took fire last Sunday and burned, together with some hay and grain. Mr. Wilder and family were away from home and no one knows the origin of the fire.”

Laura writes that Almanzo mortgaged his homestead the year after they were married and were thus required to move from the tree claim and live on the mortgaged property. There was neither a residency requirement for a mortgage nor a mortgage on the homestead, and it’s unclear exactly why Laura and Almanzo left their tree claim home to live on the homestead, other than a possible renter for the tree claim and – perhaps – a desire to be closer to town during Laura’s pregnancy. Rose Wilder was born December 5, 1886, on her father’s homestead.

Laura did write about the diphtheria she and Almanzo suffered from during the spring of 1888. Grace Ingalls recorded in her diary on March 5, 1888, that “Laura and Manly were sick with diphtheria and are just getting over it so we have Rose here [at Ma and Pa’s house in town]. She is the best girl I ever saw…” Almanzo, Laura, and Rose moved back to the tree claim in April 1888, and on July 21, 1888, Almanzo sold his homestead for $400.

Due to failure of the ten acres of planted trees to thrive on the tree claim, Almanzo knew that he would be unable to make final proof at the required time, which was between 8 and 12 years after filing, providing there were sufficient trees growing of a certain size. August 8, 1888, Almanzo relinquished (“gave up”) the tree claim and filed an intent to preempt the quarter section instead. To preempt meant to pay $1.25 per acre between six months and two years after first filing, providing – among other things – that a six months continuous residency requirement had been fulfilled, a certain number of acres had been cultivated, and a habitable dwelling had been built.

Laura and Almanzo’s second child, a son, was born and died while they were living on the former tree claim / preemption claim; Baby boy Wilder was born July 11, 1889, and he died August 7th. Earlier that year, Almanzo Wilder and Peter Ingalls (Laura’s cousin) had formed a partnership called Wilder and Ingalls in order to raise sheep on the land, using the adjoining school section as extra pasturage. While two school sections had been set aside in each township until such time it could be sold for $10 per acre (with the sale benefiting the schools), the land was typically rented prior to sale (with rent money benefiting the schools); it was not available for free use. Although Laura wrote in The First Four Years that it was her money from the sale of a pony that purchased some of the sheep they raised and sold, Almanzo was named as Peter’s business partner in town records.

On April 17, 1890, Almanzo paid $200 cash for his former tree claim. His witnesses were Alfred Sheldon, Oliver Sheldon, Uri Sheldon, and Charles Dunkley. Almanzo’s preemption papers state that their house was one story tall, 14×20 feet, frame construction, with an addition 7×12 feet. The house had a battened roof, and was boarded inside and papered. The original house on the tree claim had burned on August 23, 1889, however, and it is unclear if the claim file contains a description of the original house or the long shanty of three rooms in a row that, Laura wrote, was built near the ruins of the original house. (Two years later, a house worth only $20 was said to be on this land.) Almanzo declared that for two seasons, he raised wheat, oats, corn, and flax on from 50 to 65 acres, with 40 acres prepared for the coming season. This is about half the acreage said as being worked in The First Four Years, and the Wilders wouldn’t be there to do any planting that year. It is not known if the farm was worked, rented, or left fallow in 1890.

On May 30, 1890, Almanzo, Laura, and Rose left De Smet for Spring Valley, Minnesota. From the De Smet newspaper: “A.J. Wilder and family started yesterday overland for Fillmore County, Minnesota. They go by team in order to move more cheaply their 20 head of stock.” Much of this stock was sold in Spring Valley.

September 16, 1891, Almanzo sold his preemption claim to the Dakota Land and Investment Company for only $200 – the same amount he paid for it. The claim had been mortgaged in April 1890; Almanzo didn’t pay off the mortgage until three years later.

Although Rose Wilder Lane wrote in her introduction to On the Way Home that her family only rented a house in town upon their return to De Smet, Laura and Almanzo purchased the home at the corner of 4th Street and First Avenue for $200 in November 1892. May 24, 1894, they sold it for $350. July 17, 1894, the Wilder and Cooley families left South Dakota for Missouri.

Note: It is believed that the Wilder home stood in the area where there are still trees on the former tree claim today, close to Highway 25. As this land is now part of the Wilder Airport property in De Smet, it is surrounded by a security fence and no trespassing is allowed. You can still photograph the tree claim from the roadways or through the fence.